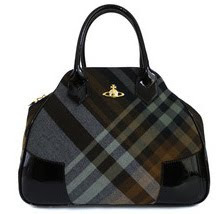 Vivienne Westwood's Bedrock Tartan Handbag
Described as the 'Queen of Rebel Fashion' Vivienne Westwood always manages to put a twist on the classic that makes everything she does instantly recogniseable and stand alone.
This season her handbags are outstanding, using different coloured plaids, leopard prints and stamped patent pv with her idiosyncratic logo to produce a collection where (close your ears, husband) I at least want two, plus the small accessories.

Of all of them this is my favourite, primarily because for winter I think it has the best colours,

and it might even hold everything I have to carry around with me! Coggles Boutique has one of the best collections, although there are fab pieces at My Wardrobe too.
Having got my latest lust out of the way, I'll move on to why it can pay to make a fuss.
I am, as my kids will tell you (and they have been known to dive under tables in restaurants, when they could fit under them, that is) one of those people who will take much, and then when just tipped over the edge, get really mad.
There are those out there who would rather leave a restaurant/hotel and pay that bill rather than make a fuss, I am definitely not one of those.
This week, staying overnight in London at what I thought was a five star hotel (where I'd got a special 'Top Secret Hotel' deal) I was allocated a shoe-box of a room, with peeling paint, a rusty (!) soap dish, grubby carpet and chipped table lamp. Five Star my xxxxxx! So although I was in a hurry, trying to change for a dinner and get organised I flipped, and I'll confess that it was the rusty soap dish that did it. By the way folks, this was a hotel actually on Park Lane.
So I called the manager (and had to get dressed again in a hurry as I was just about to get changed) and told him that what I'd been given wasn't good enough and that the hotel was misleading its clients (which it most definitely was). Within a nano-second Igor had whisked me up to the 7th floor to a beautiful fully five star and enormous room with a brand new marble and black wood bathroom which I gracefully accepted. As you do.
This highlights two points, apart from how intolerant I am. Firstly the hotel shouldn't have been advertising itself as five star. Five star indicates quality everywhere, and particularly in the details. Secondly don't allow yourself ever to be taken advantage of - in restaurants, in hotels, anywhere. When you make a fuss, and make yourself noticed, you normally get results - or that's what I find, anyway.
No sorry, for the moment I'm not telling you the name of the hotel as I've written the the US owner to tell them how they're misleading their clients and am waiting for their response. I think I'm doing them a favour - when I get a reply; I'll let you know. Maybe.

I now have too many bags on my Christmas list, none of which I'm going to get - sob......
Click through to www.thesiteguide.com for some great Christmas Gift ideas, where you can just click straight through to shop.
Posted by Patricia Davidson at 00:53