Just having returned from a short trip to San Antonio I realised there was so little I knew about the US 7th largest city and I definitely didn't have time to catch up on all of it.  So here is a snapshot on where to stay, where to eat, shop and the highlights of what to do in San Antonio plus links to more detailed information.  One word of advice - take sneakers - you're likely to be walking for miles......


1.  San Antonio is  No 7 in the list of the largest Cities in the US, following after New York,  Los Angeles, Chicago, Houston, Philadelphia and Phoenix.  There are many cultural places of interest to visit, including Museums, Art Centers, Theaters and historic sites.  Click through here to find out more.

2.  Nicknamed The 'Alamo City' as home of the Battle of the Alamo in the Texas war for Independence from Mexico.  The Alamo is a former Franciscan mission located near the center of San Antonio, where in 1835 a Mexican force numbering in the thousands began a siege against the Alamo's 200 defenders who held out for 13 days.  Davie Crockett, James Bowie and William Travis are names you will probably have heard of from the Battle of the Alamo.  Texas independence was won later in the year.

If you visit, don't expect a huge battlefield, this is a small mission site, and it's hard to believe that such an important battle took place there.

3.  One of the major attractions of San Antonio is the River Walk, also known as Paseo del Rio.  This is a network of waterways along the banks of the San Antonio River, one level below the streets and lined with bars, shops, restaurants, public artwork and the five historic missions.

You can if you want go on one of the guided barges that go up and down the River Walk, I have to confess I didn't.

4  Having investigated most of the upscale hotels in San Antonio I settled on the Mokara, which is one of the Omni Group hotels.  Clean and modern and offering seriously excellent service I'm happy to recommend it to the fussiest of travellers.  The second Omni hotel is more traditional in style and is called The Mansion, this is also worth a look.  They share an excellent fitness center.

5  A great place for dinner is Las Canarias, which is part of the 2nd Omni hotel in San Antonio.  A more traditional hacienda design as compared with its newer and modern counterpart the Mokara.  I had a delicious meal there out overlooking the River Walk.

6.  Despite the ridiculous markup most restaurants place on wines, Duckhorn Merlot is a seriously good mid-range Merlot so - and of course this doesn't only apply to San Antonio - if you see it on a wine list or in a wine store, go for it.  But sitting on the terrace at night time this was a perfect glass of wine.

7.  Where to have lunch?  That's a serious question particularly after a brisk walk, and you could so easily take a punt on somewhere that's not very good.  I recommend the Acenar Mexican restaurant overlooking the River Walk.  It's not full of tourists and the food is excellent and not over priced.


8.  On the subject of Air Conditioning.  This of course applies to most US states where the weather can be blisteringly hot.  They love you to freeze whatever the time of year.  Always take a wrap, a rain jacket and a warm layer to wear at any time.  I promise you unless you don't feel the cold you'll likely be shivering without these.

9.  Shopping.  The center of San Antonio is full of souvenir stores - if you  want to go 'proper' shopping you'll need to head out of town to The Shops at La Cantara, about 20 minutes out of the center of town, where you'll find department stores Neiman Marcus and Nordstrom alongside all the mainstream US stores such as Abercrombie and Fitch, J Crew, Victorias Secret and Sephora. 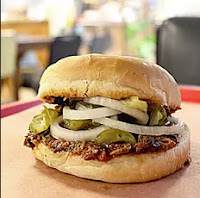 10.  Ahhhh Barbeque.  Texas is famous for barbeque, and I'm not talking about the kind we do in the UK, and if you're thinking elegant seating and a glass of wine stop right there.  Think about counter ordering for such delicacies as barbequeud pulled pork, chicken, sliced brisket and more with sides such as mac'n cheese, pickles, sliced onions and pinto beans, with the meats piled into a delicious bun.  Add barbeque sauce and tuck in. 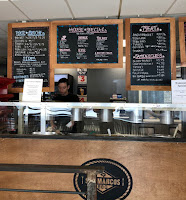 This will most likely be wrapped in paper and served on a tray.  If  you haven't had it you need to, it's an institution.  In San Antonio try Augie's Alamo City BBQ Steakhouse at 909 Broadway St, and for a more authentic out of town (about an hour north) barbeque shack pay a visit to San Marcos Barbeque at 2601 Hunter Road San Marcos.  It's unbelievable

There is beautiful architecture in San Antonio which comes under Spanish Revival style, click through to read more about it.

Posted by Patricia Davidson at 06:37