Parsifal in Munich with Nina Stemme, Rene Pape and Jonas Kaufmann - where to Eat after the Opera in Munich

Described as ‘The Opera Experience of Lifetime’ by Daily Telegraph critic Rupert Christiansen no one could disagree about the singing, conducting, orchestra and chorus. It was sublime.  To hear Rene Pape, Jonas Kaufmann, Nina Stemme, Christian Gerhaher and Wolfgang Koch all together was an unbelievable treat.

The production, designed by German artist Georg Baselitz is very dark, and the costumes, some of which have received their fair share of boos from the audience, had no deeper meaning for me than that they were very unattractive – ‘ridiculous and repulsive’  – but they couldn’t overshadow this glorious music and singing conducted by Kirill Petrenko, Simon Rattle’s successor at the Berlin Phiharmonic.

This is where I always say I’m in no way an opera critic but I’ve heard enough – starting at age 7 – to know when the music is sufficiently great to go into my ‘best of the best opera’ box.

I’ve only recently fallen in love with Wagner, and I know that there are many who would run a mile at the thought of sitting for anything up to four and half hours (excluding intervals) listening to what they may have been told is ‘difficult music’ but I have easily become won over by the gorgeousness of Wagner’s melodies.

Wagner is definitely no picnic and for anyone who wants to get to know his operas I would say do your homework.  Listen before you go and listen again.  Read the synopsis.  Only by doing this can you come to love this composer.  And it’s worth every second.

Where to eat after the opera in Munich (or at any other time). 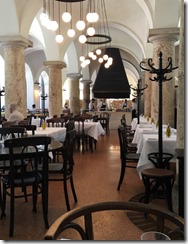 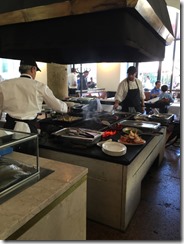 Brenners Grill is an extraordinary restaurant in Munich, sitting on the Maximillianstrasse alongside Armani, Belfast, Louis Vuitton and others.  You won’t find it in any list of Michelin star restaurants because it doesn’t have one.  But for anyone who loves good food excellently cooked and not over priced you have to come here.  I just spent three days in Munich and confess to going back several times. 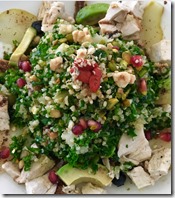 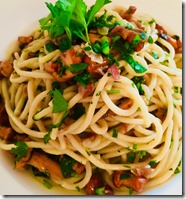 What is special about this restaurant is not just the size, the many different areas, the terraces outside and the fact that it is open all day, but the food is fresh and healthy.  It’s difficult to eat an unhealthy meal here, and if you love salads and lots of vegetables, plus freshly grilled meat or fish (not to mention the pasta), then this is the place for you.

My favourite dishes at Brenners are the superfood salad, the grilled vegetables, the linguini with chanterelle mushrooms – when in season – and the beetroot carpaccio.  I could go on but I’ll let you look at the menu.  You can have everything from a coffee and pastry here to a four course dinner.

So if you’re paying a visit to Munich have a meal here.  Make sure you book.  This is one of the busiest restaurants in town.
Posted by Patricia Davidson at 04:18