Where to Eat in London before the Show and Tosca at the ROH with Calleja, Finley and Pieczonca

Being taken to the opera and out to dinner by one of your children for the first time is a heady experience – one moment you’re the parent in charge of organising everything and the next you’re not, which to me was a really enjoyable experience, so control freaks out there, give it up and enjoy being looked after.  I definitely did.

Said child having given me a gift certificate to Covent Garden (he knows how much I love opera) I booked to hear tenor Joseph Calleja in Tosca, having heard him recently in the role in Munich, this time in London with baritone Gerald Finley and soprano Adrianne Pieczonca.  I invited the son along – yes I am lucky enough two sons who share my passion - and he promptly invited his mother to dinner. 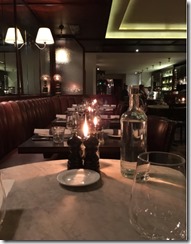 He chose Cafe Murano - Italian Restaurant in Tavistock Street, a stone’s throw from the opera house.  which turned out to be an excellent one -  I think you’ll be hard put to find somewhere else in theaterland offering such reasonable prices – and not just the pre theatre menu – excellent food and seriously good service, speedy, friendly and really pretty faultless.  He had beef carpaccio and perfectly rare grilled tuna and I had the beet salad and grilled octopus, embellished with a side of cavolo nero with chilli and garlic.  It was all very fresh and very, very good. 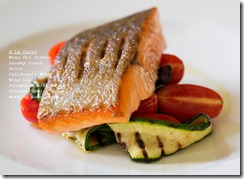 This is one of Angela Hartnett’s restaurants, Read the review in The Telegraph and go there, you won’t regret it. 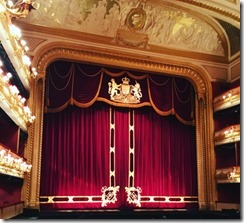 On to the opera.   Having started going to the opera at the age of 7 – seriously - I’ve been to a few, and many performances of Puccini’s Tosca.  I’m not one of your ‘they have to do something different’ opera lovers – actually I seriously dislike most modern productions because they frequently take away from what was originally intended.  And as for opera in English, unless it’s written in that language – don’t get me on that one.

Joseph Callega I knew would be wonderful, I love his rich creamy clear tenor voice.  Gerald Finley also I know well, from Wagner’s Die Meistersinger in both Glyndebourne and Paris and also Beethoven’s 9th.  His Hans Sachs in Meistersinger at Glyndebourne was absolutely superb.  But as with Paris, Covent Garden is huge (they are both roughly twice the size of Glyndebourne) and his Scarpia, though brilliantly acted – and his diction is second to none – was not, as the FT put it in their review of this Tosca, the ‘usual decibel-busting power tool’.

Adrianne Pieczonka I really didn’t know, but just having been totally spoilt by Angela Harteros as Tosca in Munich I had already heard one of the best of the best and so was minded to be critical.  Which is a shame, as Pieczonka wasn’t bad, she just isn’t Harteros.  Click on the link and you’ll see Harteros singing Vissi d’Arte with Bryn Terfel standing in the background as Scarpia.

I tried to tell the son he had to go back immediately and listen to Maria Callas as Tosca in what is almost certainly the most famous recording of all time so he has a measure to compare everything by but ‘mum I have to work’ was the answer I got – I’ll force feed it some time in the future.  Well there has to be a little mother knows best going on don’t you think?

All in all a wonderful evening, a huge treat and a night to remember.
Posted by Patricia Davidson at 03:09