I’m one of those people who returns to the same restaurants frequently because I like the familiar.  Recently I’ve needed to try some new places.  So here are my thoughts on Picture and The Clipstone – both very close to Oxford Street Station. 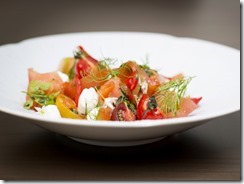 Picture is situated at the upper end of Great Portland Street.  A minimalist restaurant where you’re supposed to ‘share plates’ (where don’t you these days)?  They were extremely welcoming when I arrived in the pouring rain before opening time.  There’s a set lunch menu for 22 pounds for three courses.  There’s no choice….well it is extremely reasonable, but if you don’t want what’s on offer you’ll need to go to the main menu.  Which again is reasonable if you stick to two courses.

I suspect that Picture comes alive at dinner, and have been reliably informed that the tasting menu is superb.  Having said that, my starter salad was very good, the stone bass a little over fishy.  Would I go back.  Maybe.  Not Definitely.
Address: 110 Great Portland St, Fitzrovia, London W1W 6PQ, UK   Phone:+44 20 7637 7892 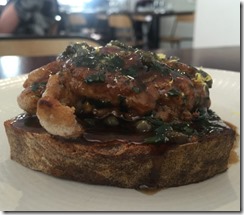 The Clipstone, just a stone’s throw from Picture, is a small restaurant and if you want a table here you better be sure to book ahead.  This is another modern, minimalist restaurant serving ‘small plates’ but be warned, you probably won’t want to share…anything.

Given the choice by a friend who insisted that we tried somewhere new I simply chose the Clipstone based on the reviews and they didn’t let us down.  The food here is excitingly good, everything is not just beautifully presented but superbly tasty. Order as many dishes as you can and you won’t want to give anything away.  I will definitely be back.
Address: 5 Clipstone St, Fitzrovia, London W1W 6BB, UK   Phone: +44 20 7637 0871
Read:  The Guardian review of The Clipstone
Posted by Patricia Davidson at 06:58

Email ThisBlogThis!Share to TwitterShare to FacebookShare to Pinterest
Labels: eating out in London, Restaurant Reviews, Restaurants, Where to eat in London
Newer Post Older Post Home