How to Wear Leopard Print–20 Pieces that Growl Back

Firstly leopard print never seems to go completely off trend, mainly because so many people really like it.  It’s pretty much a classic.  There are those who wouldn’t be seen in it.  Anywhere.  At any cost.  And those who love it and probably have quite a bit already stashed in their wardrobes.  Animal print, particularly leopard, is even more on trend this season, and it’s perfect for buying now, wearing now and wearing later on but if it’s not for you steer clear because you’re either ‘that’ person, or you’re not. 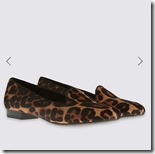 You can buy animal print everything at the moment, from jackets, coats and dresses to shoes and bags.  My advice is to just wear one piece – well you wouldn’t really want to wear that Dolce & Gabbana delicious leopard print shoulder bag – and yes by the way I do like a bit of animal print – at the same time as Boutique Moschino Ruffle-trimmed leopard print crepe de chine blouse would you?

It’s too easy to overkill a print such as leopard which can look rich and modern as a single piece worn with neutrals or denim, and more than one item, in my book, is a no no.  So the answer as to how to wear leopard is keep it simple.  The print speaks for itself, confuse the issue with too many colours and fussy styles and you’ll lose the impact.

There’ll be more and more leopard print in the stores this autumn, but the best – ie the most wearable items will go very fast.  So if you see something you like, snap it up.

Posted by Patricia Davidson at 07:38