How to Make Perfect Meringues the Easy Way 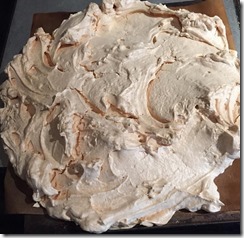 Meringues have always been my fall-back dessert for parties.  Having made them more times than I care to think about I have always stayed with the simplest of recipes incorporating just two ingredients, egg whites and castor sugar.

I’ve talked to a lot of people who’ve had problems making meringues which has put them off.  Don’t listen to them and don’t be put off making them.  Meringues are so easy once you practice a few times and simply the best for a large party, everyone loves them -  provided they have a sweet tooth - kids and grown-ups alike.

There are a few simple tricks to making perfect meringues

To make one large meringue, which forms the perfect base for whipped cream and strawberries, or cream with sliced bananas and stem ginger (or anything else you may care to top them with), five large eggs work perfectly.

Non stick baking liner – Don’t try and use ordinary baking paper, it will stick every time.

Electric Food Mixer – I’m still using my trusty Kenwood Chef which is 2o years old and counting.  If you’re making a smaller meringue you could use an electric hand mixer but the larger one is essential if you’re making meringues for a crowd.

Do not try and make this by beating with a fork, balloon whisk or manual hand whisk – it will take you forever, you probably won’t get your mixture stiff enough and you’ll end up with extremely sore arms…..

Large Eggs – I use five for a large meringue

Set your oven to 140C before you start.

1.  Make sure your mixing bowl and beater are spotless.  Any grease and the whites won’t beat properly.  Then separate the eggs.  Don’t put the egg whites together immediately but separate them into two cups and put the whites one at a time into your mixing bowl.  That way if a yolk breaks into one of the whites you can throw it away (or make scrambled eggs).  You cannot have any egg yolk in your egg whites when making meringues or you won’t get them to beat up as you need to.

2.  When all your egg whites are in the mixing bowl beat until you have stiff peaks when you lift the beater out.  Not floppy ones, they must stand up stiffly.  As soon as they reach this stage stop beating, as they can get too dry.  You’ll go through stages of foam, then the whites rising up in the bowl and turning more dense, then soft peaks and then finally stiff ones.

Some people take the whisk out and stand it up to see if they have a stiff peak.  Some turn the whole lot upside down.  Personally I wouldn’t do either.  The former is unnecessary and the latter just silly……extremely risky (for obvious reasons) and unnecessary.

3.  Then start adding your sugar, still beating on high, a tablespoon at a time.  You’ll need plenty of time for this as you need to leave time between each addition for it to be properly absorbed.  If you’re making a large meringue it can take you as long as 10 minutes to beat all the sugar in.  At the end you’ll have a lovely glossy white mountain of meringue mixture. 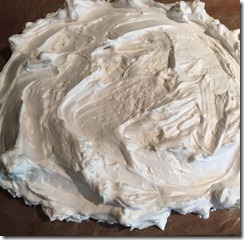 4.  Put your non stick baking liner onto your baking sheet and spoon out the mixture.  Spread it out with a fork – some people pipe it out, I don’t - into a round.  Take note that the meringue will expand when it cooks.

5.  Put it into your pre-set oven just above the middle and leave for an hour and 20 or more depending on how large your meringue is.

If you’re making two you’ll have to have one underneath the other so rotate them half way through.  Depending on how many you’ve made, and how thick they are, they can take anything from 1 – 2 hours plus.

If you can, turn them over at the end of cooking (when the sides come off the sheet easily, they won’t ever slide off if they’re large) to dry out the base.  Alternatively just turn off the oven or turn it right down and leave them there to dry out thoroughly.  This can take several hours.

You may find, with a large meringue, that it’ll have cracks on top when you start to move it.  Don’t worry about those.  You’re going to cover your meringue in cream anyway.  Expect lots of oohs and aahs when you serve it.   If the worst happens, other than you dropping it, and your meringue cracks into too many small pieces, you can always turn it into Eton Mess.  Here’s Delia Smith’s recipe for Eton Mess.

As with anything, practice makes perfect, try making meringues a few times and you’ll get it right very fast.  Nothing, actually, could be easier.
Posted by Patricia Davidson at 04:03