The smartwatch you may actually take off your Rolex for 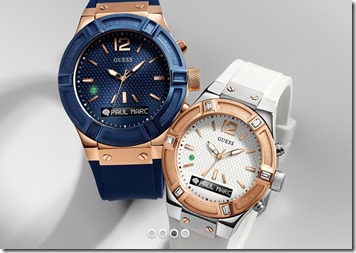 All this business about smartwatches leaves me cold.  I love my watch and I’m not going to exchange it for a piece of tech, no matter how clever, how shiny and new, any time soon.  It’s the reason that I wear a Fitbit One, which can be discreetly tucked away and access the data on

my iPhone rather than a coloured fitness tracker band on my wrist.

As someone who is addicted to tech and gadgets and likes to be ahead of the curve I find this disappointing.  I would quite like to fall in love with a smartwatch, it could be fun, interesting, and tell the time, and do all the other things that smartwatches are supposed to do.  But swap my ‘watch

as jewellery’ – which let’s face it is how so many of us wear our watches – for something less than attractive and watch-like? No fear.

I am sure there are lots of much younger techie people who will take up the latest Sony smartwatch, the LG R (which is nice looking but very masculine and for Android only) or the Motorola Moto (ditto).

Then of course we come to the Apple Watch which everyone is holding their breath for.  The latest version of iOS has kindly uploaded an icon for Apple Watch onto my iPhone screen…..just in case, but I don’t like oblong watches (unless they’re Cartier) so this one won’t be for me either, despite all the things it can do.  And this again is disappointing from an Apple fan.

Then, finally, someone creates a smartwatch that is both fashionable and functional, with bling if you want it.  And yes, it’s attractive, and it would speak to my iPhone (or an Android device).  It’s definitely quite bulky, but if you like a larger watch that doesn’t look like a brick, but that looks like……a watch but has added benefits, then this may well be the watch for you.

Guess have partnered with Martian to produce their first smartwatch which will be called Guess Connect and should be released in the fourth quarter of this year.  Martian have already produced the reasonably priced Notifier smartwatch, recognising that we want watches that look like watches rather than like gadgets or bricks, if we’re going to wear them often, and the Guess Connect h

as been intelligently designed around one of Guess’s best selling watches.

I suppose it’s inevitable that it’s taken a fashion brand married to a tech brand to create something that non fashion-victim/tech-victim people would want to wear.  Letting the geeks into the design house without fashion and style in mind can only be a mistake and alienate a major percentage of the audience.

Hopefully this is just the start, and there will be more wearable smartwatches that the luxury and fashion loving customer might just consider taking off their Rolex for.  Soon.
Posted by Patricia Davidson at 07:31