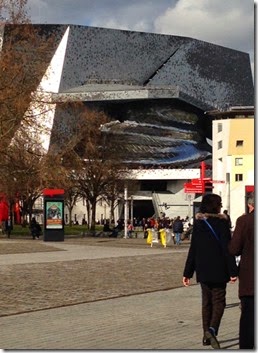 La Philharmonie de Paris opened just a few weeks ago.  Designed by Jean Nouvel, it seats roughly 2,400 people and completes the Paris Cite de la Music.  It has also taken over from the Salle Playel which has, rather extraordinarily, been banned for offering classical music for the next ten years in order to not compete with La Philharmonie.

The new hall opened with a performance on January 14th 2015 by the Orchestre de Paris of Faure’s Requiem in memory of those who died in the Charlie Hebdo shootings a week earlier. 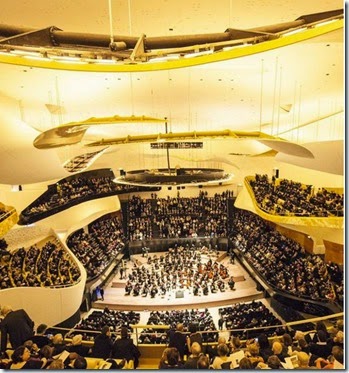 Designed to ‘envelope’ the audience around the stage it is an extraordinary place to walk into as nothing is like most concert halls.  The seating areas seem to coil in waves around the stage, and at this point in time when you enter the hall it seems a bit like chaos with people everywhere and no clear signage.  So many entrances, so many floors, and sometimes, as yesterday, no dedicated seating.

Carmina Burana by Carl Orff was played there yesterday by the Luxembourg Philharmonic Orchestra, conducted by Pierre Cao.  Most know the opening and closing O Fortuna, and the whole piece lasts just one hour, but it was spellbinding in its entirety and well worth getting to know properly.

The real joy of La Philharmonie de Paris is that not only is the sound marvellous, the musicians world class, but the tickets (for this performance) were just 12 Euros.  The most expensive tickets for some evening concerts go up to 40 Euros and then there is dedicated seating.  See the programme here.  You can book online several months in advance, and you’ll need to – they’re sold out for many of the concerts.

To get there you take the Metro line 5 to Porte de Pantin heading in the Bobigny direction and as you walk out there it is, unmistakable, in front of you.

If you’re thinking of paying a visit to Paris take a look at what’s on and pay a visit to this amazing concert hall.
Posted by Patricia Davidson at 02:49