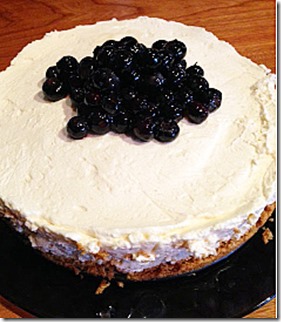 Some years back I used to make a delicious and quick no bake cheesecake recipe from the Cordon Bleu magazines called a Viennese Curd Cake - although it has nothing to do with curd cheese and everything to do with a light cream cheese mixture on a crunchy biscuit base.  I topped mine recently with glazed blueberries.

I lost the recipe and thought it was gone forever, then discovered an obscure post on a forum online so here it is again.  Made last week and it disappeared almost instantly.  I've just made it again today and thought it would be an excellent Easter dessert.

Because there's quite a lot of beating and mixing involved, and if you want to make a decent sized cheesecake you can utilise both a large mixer and hand electric mixer.  Alternatively an electric hand mixer will do - it'll just take a bit longer.

You will need a 9" spring clip or loose bottomed tin and an electric whisk.

Stir the biscuit crumbs and butter in together and and put into the bottom of the tin flattening them well down.  If you want to remove the cheesecake from the base before serving make sure you line the base of the tin with non stick paper.  I left mine on the base on a pretty plate but beware it can slide off very easily.

Cream the cheese and sugar in a mixer.

Whisk the egg whites till stiff.

Whip the cream to soft peaks, do not over whip.

Sprinkle the gelatine onto a small amount of water in a little pan.  Then heat gently until it dissolves.  Don’t allow it to boil.  Then beat it gently into the cheese mixture pouring in a stream, together with the vanilla essence.

Fold in the cream and then the egg whites with a big spoon.

Pour into the tin, levelling the top and leave to set in the fridge.

I served mine with glazed blueberries but you can put strawberries or any other kind of fruit on top.  To glaze blueberries put a tablespoon of redcurrant jelly into a little pan and melt with a low heat.  Stir in the blueberries (one pack) until they're all covered with the jelly and spoon onto the cheesecake.

The lady who wrote the post on the forum with the recipe, where I discovered it again, says that it freezes beautifully and also that she puts melted chocolate into half the mixture.  Yet to try.  Will report back........

Posted by Patricia Davidson at 07:24