The Hit List – What Women Wear and Men Hate

So who do you dress for?  Yourself?  The man in your life?  Fashion?  Most of us tend to dress for ourselves, fashion victim or otherwise, as if you’re happy with what you see in the mirror you’re likely to be more confident and at ease with yourself……right?

If you’re a risk taker you’ll embrace fashion’s latest fads and the neon, the leggings, the asymmetric hem skirts, the cinched waist cropped leather jeans with enthusiasm, not realising that you’ll be putting off much of the male community around you let alone the fact that they may not suit you.  As if you care.  If it doesn’t matter to you, fine.  If you’d rather be pleasing on the eye to males and females alike then you may want to take into account this list that men are said to not like.  Some of which I entirely agree with and others I don’t.

Onesies:  This one is no surprise.  A less flattering garment I can’t really imagine.  A onesie that fits you perfectly? Who cares.  This is something that to my mind should never have been invented, wonderfully comfortable maybe but there are other choices.  And this has to be the least sexy piece of clothing on the planet.  Ok to and from the gym?  But if you’re not the

height it was designed for it won’t fit anywhere.  Please, let them go, along with the jump suit and play suit.

Harem pants:  These are now thankfully hard to find except at top  designer stores (don’t ask) as a less sartorially elegant look then the crotch of your pants around your lower thighs, or even worse, your knees, I can’t think of, other than the above.  I agree with the men here – these should be banned.  They’re rarely flattering unless on absolutely the right person and so often worn by someone who shouldn’t, which is pretty well all of us. 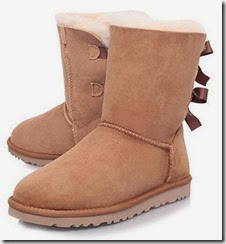 UGG Boots:  Men don’t apparently like them.  I think they’re ok as slippers (the shorter ones) but as for slopping along the high street I agree.  They’re become such a generic, anyway, wouldn’t you want to wear something a bit more interesting?  With a heel?  Thankfully UGG have brought out some stylish ‘proper’ boots this season which would be well worth investing in and which no one could object to.  It’s the sheepskin lined flat boots that are so warm you want to wear them all the time tha 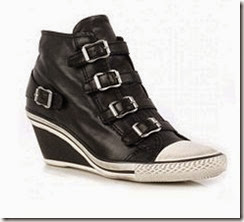 t the men object to.  So collect them both.

Wedge sneakers or trainers:  Another footwear trend we should lose if we want men not to hate what we’re wearing, footwise, anyway.  I have to say I  agree.  Neither a trainer, nor a shoe, and wedges anyway can be clumpy.  These look very modern, and if you have to have a pair make sure they’re by Ash, but if you want to be admired avoid them altogether and buy a pair of their wonderful ankle boots instead. 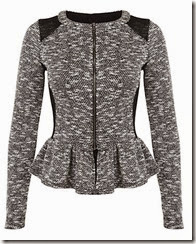 Peplums:  I’ve always thought these look ok on the right person and in the right way but apparently they’re ridiculous and totally unnecessary.  If you have a jacket or dress with one of these added to it make sure it flatters you and doesn’t make you look horizontal, and possibly consider wearing it the other sex isn’t present, but assuming you bought it to show off that may be difficult.  I know for a fact they make anyone curvy look wider and don’t hide anything.  Enough said. 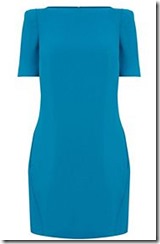 Shoulder Pads:  Frankly I don’t think there’s much to worry about here, as the padded shoulder Alexis Carrington look went  out a long while back, but you never know the vagaries of fashion and here’s a dress which is a good example.  Advice?  Steer clear of anything that creates a horizontal line across your shoulders and anything heftily padded.

Heavy Eye Makeup:  Anyone would think from the style guides that you should use lashings of khol, dark eye shadow and mascara but if you want to be taken notice of and seen as yourself, rather than hiding your face, leave the heavy stuff to the very young (just because it’s hard to stop them) and models.  I love makeup, as anyone reading my blog will know, but I still want people to be able to see my face.  Over use of makeup particularly round your eyes and if you’re no longer a spring chicken will either get you laughed at or avoided – looking as if you’re trying too hard. 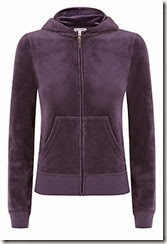 Fleece and Velour:  Soft, comfy and stretchy and perfect for the gym but not liked by the male population.  If you live in a very cold house you’ll no doubt ignore the dislike of fleece during days in, but don’t take it out with you unless you’re walking the dogs in the garden.  Stepping out properly in either does not produce a 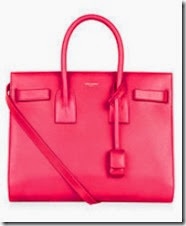 Neon Anything:  Too bright, too yesterday, resist the temptation to  light up the night with your neon yellow jeans.  And if you’re really tempted to invest in Saint Laurent’s pretty (my word) neon pink handbag make sure you have the black and beige versions as well, as he won’t want to go out with you carrying the pink……..but cheap neon is even worse than designer of course.

Other items that I’m told men hate…..
Leopard Print or any animal print for that matter – I can’t agree here.  Too much and it can be dreadful, a sleek dress, pair of heels or bag?  I think they can look great.

Culottes:  We really don’t need these back again do we?  I remember wearing them I’m not going to tell you how many years ago.  Never again and if men don’t like them I totally agree.

Leggings:  It totally depends on how they’re worn.  With the advent of a more laid back gym-to-lunch style I think a good pair of leggings preferably on a good pair of legs can look…..good.  Just not worn the wrong way.  And not with heels.

Trouser Suits:  Most of the time these look very androgynous.  Personally I don’t like them so I don’t care that men don’t either.  If you wear them all the time I suggest you ask the men/man in your life to tell you what they think of yours.

Posted by Patricia Davidson at 07:27