The Phenomenon of Pho – Favourite Vietnamese Restaurants from London to Houston 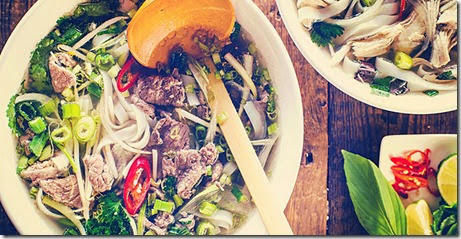 I was introduced to Pho (one of the most popular dishes at any Vietnamese restaurant) in Dallas, and have never looked back.  For lunch time this is an all time favourite at any time of year.  Inexpensive (usually), fresh, tasty and healthy.  A good Vietnamese restaurant draws from the Asian population working or living around it plus anyone else in the know looking for a good quick meal and it can be hard to get a table. And don’t even think of trying to book.

You can have the original pho, a rich broth which takes many hours to prepare,  filled with rice noodles, herbs, and the meat of your choice.  You’ll usually be offered a plate of herbs, chilies and bean sprouts to mix in as you wish, plus sriracha, which is usually on every table, and is an extremely hot sauce.  Go carefully with this one if you’re a pho beginner. 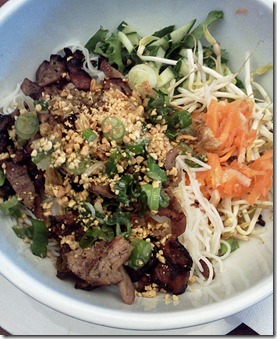 Alternatively every Vietnamese restaurant offers Bun, light rice noodles served with a salad of carrots, lettuce, cucumber and topped with nuts and shallots plus the meat or shellfish of your choice.  Being a creature of habit I nearly always have this dish with grilled chicken, unless I’m cold, when I’ll have a bowl of steaming pho.  Mix your dish of bun up and pour over it the little bowl of nuoc cham sauce that you’ll be offered, a sweet, salty and spicy dipping sauce.

Starters can include spring rolls, meatballs and calamari, but be aware that a good bowl of pho or bun will fill you up and you may not need to have something to start with.

London – Pho Cafe is a fast growing chain of pho restaurants based all over London and also in Brighton.  Pho Cafe started off life in 2005 in Clerkenwell in East London and has never looked back.  You’ll find restaurants in Islington, Battersea, Oxford Circus and St Paul’s to name but a few.

Also read Esquire Magazine’s article on the best pho restaurants in London, or the alternative by View London.

Paris - In Paris I’ve been to several Vietnamese restaurants, notably near to the Place d’Italie, which is quite a trek to get to if you’re staying somewhere central.  My favourite, recently discovered, is Little Hanoi which is a modern, clean restaurant and always full.  Less like a canteen than some of the restaurants in the 13th and more like a cafe.  Absolutely delicious food.

Read the Time Out Guide to the best Vietnamese restaurants in Paris.

Dallas – Because I’ve spent quite a lot of time in Dallas I’ve tried several of the Vietnamese restaurants, notably Pho Colonial, which is situated in Downtown and always packed at lunch time, Pho is for Lovers, a little cafe in three locations offering delicious food (wear the t-shirt and get a discount), and my personal favourite Green Papaya where yes you do have to pay to have your car parked for you but the cooking is excellent and the service friendly and speedy.
Read Zagat on the Best Bowls of Pho in Dallas.  I would have also mentioned Dalat, however I had the worst service there – no food arriving in fact, so it’s not on my personal list any more.

Finally on to Houston, which I have spent less time in but had pho (or bun) on each occasion, and where I can recommend Pho Binh, on Westheimer – the main street that cuts across Houston and a clean busy cafe on a hard to park square which serves some of the best I’ve had anywhere.

Read Zagat’s Guide to the Best Vietnamese Restaurants in Houston.

If you enjoy Asian cuisine you may still never have tried Vietnamese, let alone pho or bun, but it’s some of the best food particularly at lunchtime so it’s well worth giving it a go.
Posted by Patricia Davidson at 06:02