Dukkah – Unexpectedly Delicious Egyptian Accompaniment – Buy it or Make it Yourself 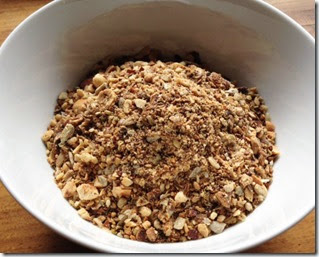 Dukkah is an Egyptian mixture of nuts, seeds and spices that goes with many things – as a dip with bread and olive oil, sprinkled over salads, added to your muesli – yes really – or mixed into grains to give a bit of extra crunch and flavour.  The possibilities are endless, and once you start including it into your cookery repertoire you’ll wonder how you managed without it.

There are several places you can buy Dukkah, notably Ottolenghi, which I’ve tried often and love and the Dukkah Company Cornwall, which I haven’t yet tasted.

However, if you don’t want to buy your Dukkah, or you want to know how to make it, you can find Ottolenghi’s Butter Bean Puree and Dukkah Recipe and make it yourself.  I’ve done this several times.

I’ve also made it without some of the ingredients here, notably the peppercorns and coriander seeds and substituted very hot cayenne pepper (by  mistake the first time) for the paprika, which makes it wonderfully hot for those who like hot things.

A couple of things:
Depending on your oven the hazlenuts may not need as long as you think.  They turn black very easily so keep an eye on them and turn the tray half way so that they don’t burn at the back.

Although the name dukkah means ‘to pound’ or ‘to crush’ in Egyptian you actually don’t need to get out the pestle and mortar.  Just tip all the ingredients into a blender and pulse very quickly, three or four times, checking after each one.  You want a mixture of textures, not just a fine sand.  I like mine quite crunchy, you may want it less so, experiment and see which you like the best.  And Maldon sea salt is essential.

Once you start making this delicacy you won’t want to be without it in your store cupboard, and the joy is that it lasts a long time, so you can make quite a few jars.   The problem is that once your family discovers it it will vanish fast.