Not being someone who is straight up and down and loving sleek fabrics and body skimming styles,  I know that the best dress for any curvy girl who needs just a little bit of camouflage is a judiciously ruched dress. 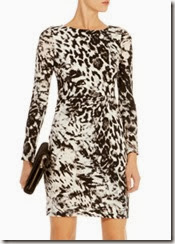 Happily ruching is now to be found everywhere (sometimes in too much abundance) by the likes of designers Diane von Furstenberg and Helmut Lang and on through to Karen Millen and Phase Eight.

Some designers still eschew ruching (or strategically placed draping) insisting that their customers should be able to wear bodycon with panache, however they do so at their peril, as who, seriously, over the age of 35 doesn’t benefit from a little bit of help sometimes? 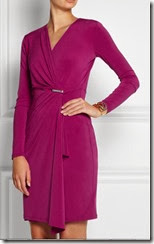 Brands to look out for are Diane von Furstenberg, Michael Michael Kors, Vivienne Westwood Anglomania and Lauren Ralph Lauren.  Almost all of these wearable, flattering, packable dresses will be in jersey, and quite often will not be as expensive as you expect.  Long live the ruched dress………

One thing to bear in mind if you invest in one of these, particularly in a fine plain fabric where the ruching is frequently only on the front, is what to wear underneath as the last thing you want to show are lines.  So when trying on make sure that you look at the back and side, and work it out from there.
Posted by Patricia Davidson at 09:05