Set Lunch at The Orrery in Marylebone – A High Class Meal for Less Than £25. 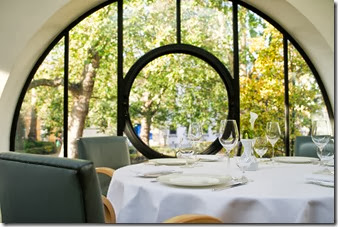 When my friend suggested that we meet at the Orrery Restaurant in Marylebone High Street for lunch I was slightly shiverin’ in my shoes, as I remembered that the last time I had been there it was very expensive, even for their set lunch.

I’m happy to say that this has all changed, and they now offer at lunchtime a set meal of two courses for £23 or three for £26, which is pretty reasonable for a restaurant of this standard.  Wine by the glass starts at £5.50, and fizz at £8 (Prosecco).

Needless to say if you stray off this menu you’re going to be paying up into the stratosphere, however you may well be tempted by seeing what your neighbours are partaking of.  The set menu is quite basic, the first courses very simple but the main course worth the whole caboodle on its own, with perfectly cooked meat and fish and seriously good veg.  I had the poached fillet of salmon, and my friend the pork cutlet.  What stood out was the attention to detail and flavour, even off such a reasonably priced menu.

The Orrery stands near the top of Marylebone High Street, right next door to The Conran 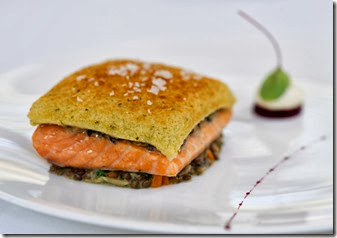 Shop – no surprise there as this was originally a Conran restaurant.  The Orrery’s head chef, Igor Tymchyshyn joined the restaurant in 2008 from his position as head chef at the Michelin starred Mirabelle restaurant in London (now currently closed).

This is well worth stopping off at for a beautifully served lunch in elegant surroundings where you don’t have to break the bank.  Although book first as you may not get in otherwise.

Oh and by the way, the word Orrery (just in case it isn’t in your personal lexicon) ‘An orrery is a mechanical device that illustrates the relative positions and motions of the planets and moons in the Solar System, in a heliocentric model’ (Wikipedia).  Which may help you understand some of the decorative touches in the restaurant.

Posted by Patricia Davidson at 01:36