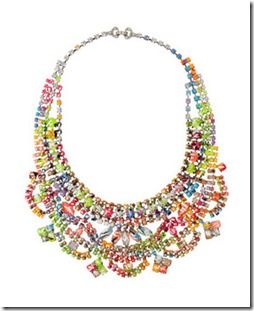 Three words sum up Tom Binns jewellery; edgy, unusual and addictive, because one piece would never be enough.  Having started his company in 2004 and been worn by the likes of Cate Blanchette and Michelle Obama and picking up awards such as 2006 Accessory Designer of the Year from the Council of Fashion Designers of America and the 2007 British Fashion Council (BFC) Award for Best Accessories Designer along the Tom Binns is an accessories designer on an upward curve. 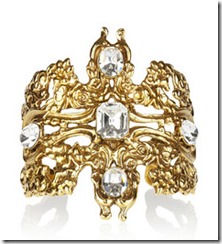 His creative inspiration comes from the early 20th Century avant-garde Dada movement, an anti war protest against everything that was bourgeois.  His jewellery looks to shock, stun and make a statement, featuring larger or brighter than life pieces frequently in abstract shapes and incorporating motifs such as sculls and safety pins where you would least expect them. 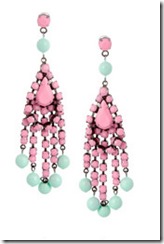 Tom Binns has designed a collection that is found at Net-a-Porter for spring 2013 that is brightly coloured and very wearable, inevitably some of the pieces have already sold out (and may come back in), but if you collect contemporary jewellery and want to stand out this summer you’d better get going right now.
Posted by Patricia Davidson at 03:41