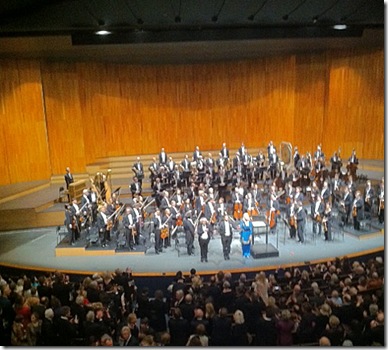 When an invitation came my way to work for a week in Paris, followed by a trip to one of the most famous music festivals in Europe – the Salzburg Easter Festival, needless to say it didn’t take me very long to decide that I had to be there.  The opportunity to combine wonderful music, great food and great friends was far too much to resist.  So I didn’t.

Herbert von Karajan founded the Salzburg Easter Festival in 1967 as a means of expanding the traditional summer Festival.  For most of the festival’s history the resident orchestra has been the world renowned Berlin Philharmonic, which continued its involvement after Karajan’s death with the artistic direction of Claudio Abbado, followed by Simon Rattle.

The Berlin Philharmonic leaves the festival this year, to be replaced by the Dresden State Orchestra, one of the oldest orchestras in the world, under the artistic direction of Christian Thielemann.

The Salzburg Easter Festival is probably the only time you have the opportunity of hearing one of the greatest orchestras in the world play a complete opera live.

Salzburg was absolutely the highlight of my time away.  To have the opportunity to see Simon Rattle and Zubin Mehta conduct the Berlin Philharmonic with soloists Murray Perahia, Emanuel Ax, Jonas Kaufmann, Anne Sophie von Otter and a program which spanned from Schumann’s Piano Concerto in A Minor to Mahler’s Das Lied von der Erde, taking in Bruckner’s incredible 8th Symphony on the way was heaven.

In all, it was magical, with the most exciting moments being Murray Perahia practically flying off his seat in the Schumann and the last movement of the Bruckner 8th with Mehta, which, if you don’t know it, could almost be a combination of some of the music from The Lord of the Rings and Raiders of the Lost Ark.  As the Easter Festival always contains one religious work this year it was the Faure Requiem, poignant and exquisite.  This is the In Paradisum

This is the first movement of the Schumann, played by Pollini conducted by Karajan with the Vienna Philharmonic in 1974 in the Salzburg Grosses Festpielhaus (Great Festival Hall)

And from the last movement of the Bruckner, again conducted by Karajan with the Vienna Philharmonic, recorded in 1979.

The Festival ended with Bizet’s Carmen, which was beautifully staged, but the overall performance didn’t match up to the passionate standard of the other works despite Jonas Kaufmann as Don Jose and Simon Rattle’s conducting the Berlin Philharmonic.  At the end the entire orchestra took to the stage with the cast, something I certainly have never seen before but totally deserved.

Agnes Baltsa as Carmen in the Habanera, at the Met, conducted by James Levine.
Elina Granaca at the Met – as seen last year with Roberto Alagna.

I was going to write this post about what to wear to a Gala (a Little Black Dress and heels, inevitably) but listening to some of the music again the Salzburg Easter Festival deserves its own post, it was most definitely a once in a lifetime event.

And before I forget – not just one but at least four little black dresses will do the job perfectly, and make sure you have heels you can walk in, even if you just have to teeter from the Festpielhaus to the excellent Austrian restaurant at The Goldener Hirsch.  ‘Valet Parking Heels’ will not do it on this occasion.

Posted by Patricia Davidson at 04:45