When Every Picture Doesn’t Tell a Story …….. All Saints and the Curvy Dress

I’m well aware that I’ve written about All Saints recently so please don’t go thinking I’ve lost it completely, but as I had half an hour to spare yesterday morning and as I was in Regent Street and passing their flagship store (and already liking the brand) I thought I would take a look.

All Saints is very much a destination store, in that you’ll probably know this edgy/rock chic brand before you step inside.  Many of the clothes aren’t easy and they’re very much aimed at a specific young, modern, urban customer.  Sizing goes up to a 14 or a US size 10 and don’t expect it to be generous.  They want their clothes to be worn by their customer demographic, which is very specific.  They fill with huge talent a niche which others try to fill and do it mostly badly and they let the brand speak for itself, so it’s not surprising that they’re so successful on both sides of the pond.  They’re just………………brilliantly different.

However, and I’ve said this before as well, occasionally they’ll come out with a style which is slightly outside their niche.  Whereas most of the clothes I would hesitate to try, let alone wear, they’ll produce a piece which is right on-trend but ageless and timeless and would suit a lot of women.  Thus the ‘curvy dress’, my term, which does not look that curvy on the model but is wonderfully draped to make it so.  Beautifully made, eminently wearable, glamorous, curvy and the rest. 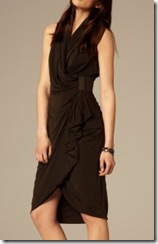 The still life pictures show the shape of the dress very well.  The model pics don’t, in my opinion, show that this is an ‘everywoman’ dress, but then All Saints may well not particularly want to send that message on.  Go try or order online and see for yourself.  It’s an exceptional dress.  The leopard print has sold out in many of the sizes.

Also just because I can’t leave it out I spotted this silk ruffled blouse.  Again one for the shopping bag and no……I haven’t yet.  No promises mind.  It comes in black as well.

If you do order from All Saints online remember that the sizing is very true.  Whereas brands such as M&S and Next may give you an extra half an inch All Saints do not, as is true of most mainstream designers.  If they could all agree on sizing life would be so much easier and online returns would drop dramatically.  Unfortunately pigs may truly fly before that becomes reality…………………….

Posted by Patricia Davidson at 07:30