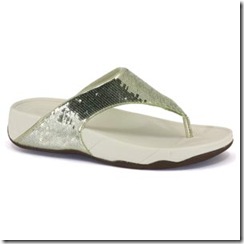 A couple of weeks ago I was making a connection at Chicago airport which I nearly missed and only made because, having re-checked my bag (as you have to) and changed terminal (oh boy) I then ran approximately a quarter of a mile from one end of Terminal One to my gate, inevitably right at the other end.  I wasn’t wearing trainers, nor, thank heavens, any kind of heels, but my faithful gold FitFlops which, I discovered are not only perfect for walking long distances in, but running as well.

I really don’t know if they have the gym-like powers they purport to as I’m becoming a bit of a gym addict anyway and I’m sure they’re not intended to take the place of other exercise, however much it’s lovely to think that they might.  But from the point of view of sheer comfort whether walking or running anywhere, and a modern look, they are quite simply the best.

As I have the job of walking several dogs each morning I invested in a pair of FitFlop Mukluk boots (and oh dear I have the sheepskin lined slippers as well – I never do things by halves) and every single pair is a dream to wear. 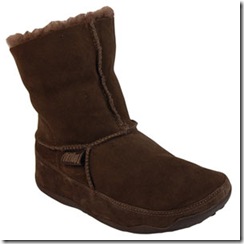 Having converted several people recently, both friends and just before meetings (when I’ve been frantically trying to change into my heels, as you do) I thought I should write about these again, because if you haven’t thought of buying a pair yet you almost certainly should.  In the winter, particularly, the boots are practically un-take-off-able. 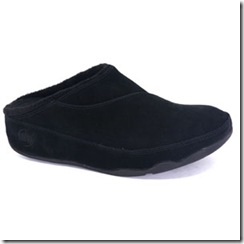 Incidentally, don’t expect to be complimented on your choice of footwear necessarily – I don’t think you wear these for their beauty (just my opinion) but you’ll be the one smiling with happy feet with others complaining about their blisters the next time you’ve needed to get anywhere fast.

Finally, after a huge amount of shouting, changing cars (bike/tv/golf clubs etc) and lost keys (on the roof) the travellers have left to take the daughter and younger son back up to uni in Edinburgh.  So peace has descended, well at least for a few days.

Posted by Patricia Davidson at 05:29