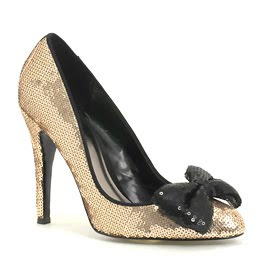 There are sequins out there by the millions. Everywhere you look, there they are, from sequin skirts and dresses to bags, shoes, jackets and more. We are going to be totally blinded by bling and sequins this Christmas.

As a reasonably normal sized (!) person who does like a bit of bling, the real thing if at all possible, I have been debating the to sequin or not to sequin conundrum and decided to stick with my DKNY sequin tote that landed 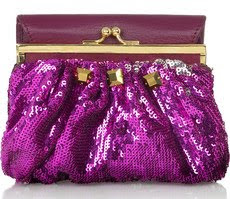 at my feet (on sale) last year, and just keep to the normal type of bling.

Visiting Paris recently I spent time with a tall slim girl who was wearing a modern gold sequin jacket (all day) with her black dress and boots and looked perfect. A great look if you can pull it off and one which works excellently from lunch to cocktails.

Unfortunately I am not that tall slim person so as I've said I'll be keeping my sequins to the minimum. Also, having tried, in the name of research, don't you know, a lot of sparkle on as soon as it hit the shops, I have the following to say. 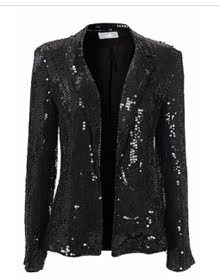 Don't wear more than wear sequin item at a time.

Don't wear a sequin dress unless you have a figure like Cheryl Cole - every lump or bump will show.

Buy the most expensive piece you can. A beautiful sequin clutch will last you for years, a cheap and chearful one will probably only go for one season.

Sequin evening shoes are great on slim legs, be aware they will probably make you look shorter.

Keep it insouciant, whatever the occasion. Sequins can look very 'grown up'.


Strange morning: Apparently today is Mega Monday (as opposed to Cyber Monday) in the US - both meaning the same thing, that this is the day we'll be spending more online than any other this year. Hmmm, I think we're a week ahead, we were last year - so it'll be interesting to see if we have another Mega Mega Monday next week.

Two interviews this morning for BBC Radio, one at 7.20 - yawn - and the other at 8.20. In between I groomed frantically and, stupidly, took the dogs out, worrying that they were going to bark during the interview (which they have been known to do). One, who shall remain nameless, refused to come in. Of course! On a morning when it mattered......why would she?

So I went off to be interviewed (over the phone), having to leave my back door open and hoping that madam would deign to return. Which she did. Phew.

Have you had a look yet at our huge range of Gifts for Her? For mothers, sisters, girlfriends, daughters and (shhhh) treats for you too. It is nearly Christmas, after all.
Posted by Patricia Davidson at 00:55